And so she's become a #novelist,too 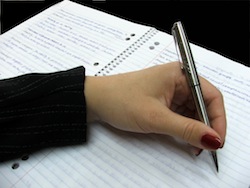 The #MeToo movement, also called a moment, has delivered many disturbing ones over the past months. Men have been forced to face their history with the women in their lives, and for some of them, it's a history of failures. There's not an ending coming for this movement anytime soon. It would seem the only repair is to raise a new generation of men who see these violations to be as senseless as genocide.

The #MeToo story spreads across unexpected subjects. Writing novels has taken a hit. One tale is being told by one woman about another, a woman she admired and held up as a role model. In the New York Times, a column by Amanda Taub tells the story of Heidi Bond. These stories all have lessons and costs. Taub's story about Bond includes a striking comment about anyone's career as a popular novelist. Becoming an author can be portrayed as a misfortune.

Bond has reported that Judge Alex Kozinski sexually harassed her a decade ago while she worked as a law clerk for him. Clerks, if you don't know, are lawyers in this kind of job. Taub knew Bond while both women studied in Michigan's law school. This time out, the harassment story led to Bond leaving her profession and slipping away from her career, and even the use of her name.

Taub explains, in the article that ran in the Times.

The harassment tainted her career so much that even though she had access to some of the most coveted jobs in the country, she wanted nothing to do with them. She left the legal profession entirely, and is now a successful romance novelist writing under the name Courtney Milan.

Bond's transition from abused attorney to romance novelist looks like it's painted as an utter fall from power and magnificent, meaningful work. Becoming a novelist is no small bit of work to get successful at it. Romances are read by women, by and large. The tone that I read in Taub's writing — she's a journalist, and so a writer like Bond — felt like the career of romance writing was some ash heap.

Bond's accomplishment has her books in the top 500 Victorian romances at Amazon. Big list. High number. She publishes herself, which is the smart way to get books out if you write in genres.

But romance writers get dismissed, even by other writers. Romance writers get read in great numbers, a thing that separates them from some earnest, MFA-studied novelists, nominated for prizes because their readership is rooted in literature experts. Romances first came into my house in a box from a good friend, one with a Master's degree in Library Science. Jane said she had another box of these romances waiting for me if I made my way through the ones she brought.

I'm trying comprehend Bond's story on an emotional level. A bright and capable woman says she was abused by Kozinski and ultimately left her dream career. The place where Heidi Bond resurfaces is amid a life's work creating stories about women and men striving to love each other. Those stories often involve women coming into their rightful places in life, where their talents and drive are rewarded with happiness. They are recognized and respected. Sometimes these heroines' jobs in the novels make a great difference in life.

On a personal level they want it all, though, and they are entitled to that. They want to experience love, and the majority of those characters want that love from a man. The men in the romances are unlike the judge. They are sometimes mistaken and full of flaws. Few of these men have a disgraceful act against a woman in their past. They are complex nonetheless.

Complexity is something that's been put to the side during the movement. I'd like to believe that Amanda Taub's article did not use "romance novelist" as a tut-tut clucking of disregard. It's possible that I read that into the piece on my own. But just after Taub delivers the report on the romance writing, she tells us that Bond's story is about "the systemic and institutional consequences of this kind of harassment."

Those consequences include working to become a successful novelist. This in no way forgives what the Kozinski may have done. There's also nothing like novelist harassment, unless you count the unkind acts that Amazon reviewers do every hour of every day. Like Bond knows as an author, we sign up for that kind of abuse as writers.

Writing novels might not change the world in the same way that laws in courtrooms can. But creativity brings meaning to our lives, and few kinds of creativity aim so straight for our hearts as romance novels. Writing them can be noble work, not a consolation prize.

We have to take care here in this moment, while women and the men who support them weed out abusers and re-educate them, not to lose our grip on love. Exemplary love between men and women is no fantasy. Having a role model is a good thing for every one of us, whether it's a top lawyer or the heroine in a novel. A model from fiction is created with imagination—the special talent that writers have to inhabit and comprehend, with compassion, every aspect of human nature and foibles.

If that sounds like I am equating being a lawyer headed to the Supreme Court with being a successful romance novelist, I'm guilty of that. Without being too glib, laws do get reversed, even the ones that do good. And so good laws can then be replaced by unfair ones. The worst thing that can happen as a result of a romance novel is that it gets pulped by a publisher who couldn't sell it. These days even that's unlikely, since self-publication, and success, is well within any hard-working author's grasp.

Harassment is abuse and a sin and a crime. There's no crime in abusing writing, but I'd rather not see it thrown onto the ash heap. We may not need to celebrate this moment by dismissing something as complex as creating a novel. We're going to need love going forward. We'll need it closer to our lives than just imagined in the pages of a book. Those pages are a good place to start, though.